Hello, there. How are you?

This week, Florence has celebrated its Saint Patron on Monday, June 24th.
Each city in Italy has its own Saint Patron, and for Florence it is San Giovanni (St.John).
The city gets filled with a cheerful atmosphere from the morning: people wearing medieval costumes with flags, drums, and trumpets march through the city from the Signoria Square to the Duomo Square. The parade passes also by Accademia Riaci.
They open the Duomo front door and “the Gate of Paradise” of St. John Baptistry, and they hold Mass.

In the afternoon, they hold the championship game of “Calcio Storico”, an early form of Italian football. They divide the city of Florence into 4 wards, and they fight against each other. As in the past, Santa Croce Square turns into a giant sandpit, which is the playing field, and there are also seats for the audience. Unlike modern football, they can use hands, punching, elbowing, an choking…it’s a wild game!

At night, the fireworks at the Michelangelo Square. The best viewing spot is the Grazie bridge.

Why don’t you come to Florence and enjoy such atmosphere? 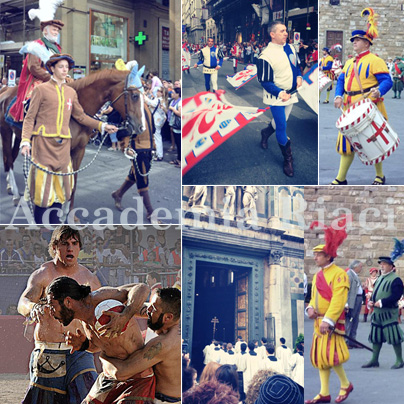